View cart ““The Promise”, Behind the Scenes with Abraham and Sarah” has been added to your cart. 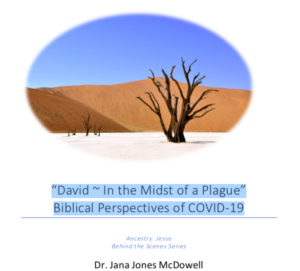 Biblical Perspectives of Covid-19.  Was there a plague similar to the Coronavirus (COVID-19) three thousand years ago in Israel during the reign of King David?

In this installment of Ancestry. Jesus “David ~ In the Midst of a Plague”, we will deeply analyze how David’s sin of taking a census for his personal gain had abysmal effects on the Jewish people.

As a result of David’s sin, God acted upon the nation of Israel by sending a just punishment. Of interest is that He allowed David to choose between the punishments of times of pestilence, famine, or being pursued by his enemies.
Pestilence, (or plague) was David’s choice as judgment for his sin.
Interesting choice, as biblical scholars exegete the reason for David’s choice was because he knew that to be in the midst of a plague was to be in the hands of God.

With the other choices given to him by God, David knew that he would be subjected to the will of man, so he instead, chose pestilence. Knowing that even though the judgment of having to endure pestilence was harsh, David took comfort in knowing that he would ultimately be in the hand of the Lord and would experience His mercy.

During the devastating times of the plague, David put himself and his people’s fate back into the hands of the Lord, leading to God averting the plague from the land.
Ultimately as a result of the plague, God’s glory and grace were revealed with the purchase of a site of land from the Jebusites on which the Temple would be built.

Even though the events are separated by over three millenniums, it appears from Scripture what we should do today after realizing how David turned back to God to save his people.

Now more than ever during the COVID-19 pandemic, we, as individual people, and as nations, must turn to God and put our faith in Him.

Mysteries of the Apocalypse…through the eyes of a Jewish John

Ruth and Boaz, the Moabite and the Redeemer

Behind the Scenes with David and Bathsheba

“The Promise”..Behind the Scenes with Abraham and Sarah

“David”, In the Midst of a Plague”  Biblical Perspectives of COVID-19

Noah and the Ark….Behind the Scenes

Joseph and Judah…Behind the Scenes

A Christian, Dr. Jones began her research into Biblical studies a number of years ago, focusing on “context.”

Her research revolves around the  “context,” with the study and application of the Judaica Books of the Prophets and the Hagiographa (A new English translation of the Hebrew Masoretic text and commentaries by Rashi and other Rabbinical scholars), and the books of the Midrash Rabbah. The basis of this was the exegesis of the Hebrew Bible with application to the origins of Christianity.

Dr. Jones-McDowell continues her research on the Jewish roots of Christianity as a student of the Israel Bible Center.

Dr. Jones-McDowell and her husband, reside in the southwest with their horses, a Bengal cat named Ravi and their border collie, Sarah.

This site was created to expand your knowledge of the Bible.  Material written by Dr. Jana Jones McDowell will guide you through the Bible like never before.  Described by peers as “Biblically Sound,” Dr. Jones McDowell brings characters of the Bible to light as never presented before…..enjoy the journey.